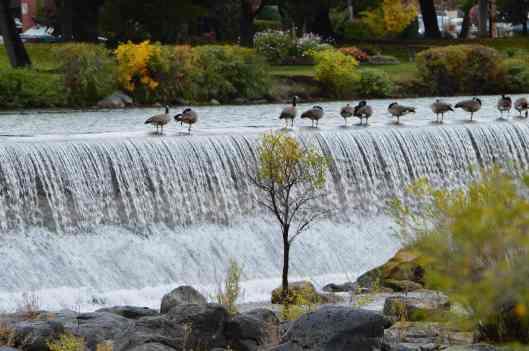 Today had its ups and downs, as Michael put it to me a while ago. We drove over several passes, two of them over 6,600′ in elevation. We crossed the Continental Divide a few times. The weather was rainy again but other than in the passes themselves the clouds were higher than yesterday giving us better visibility both for driving and sightseeing. The scenery was striking and so different from the mountain passes I’m used to. At home in Washington state you can’t see very far on either side of the road as the passes are densely forested. Here there are wide open vistas with endless ridges and imposing rock formations.

As I looked out at the spectacular views I thought how easy it would be to get physically lost in all the vastness and repetitive ridges and valleys. We had the advantage of a paved freeway guiding us through to our destination. I don’t think I could do it with just a map and compass; one rise looks like so many others as do the depressions. I thought about the pioneers coming through and how important it was to have a guide. And before them the indians had to find landmarks and methods to find their way across the landscape. And life is like that too, we each have to, consciously or not, find a north star to guide us through our life and bring consistency and meaning to our experiences.

We started our day with a walk along a greenbelt bordering the Falls in Idaho Falls. The Falls originally were a natural set of rapids on the Snake River. At some point a retaining wall for hydroelectric power turned the rapids into a long L shaped set of falls. The city has built a nice, easily accessible greenbelt with a pathway alongside the river and the falls. Even though man-made, the falls themselves were visually compelling. Some Canada Geese were perched along the retaining wall and looked like they were standing on water all in a perfect line. The rushing sound of the water was energizing. A nice beginning to the day.

We ended the day in Bozeman at the home of great friends, the kind that even though you don’t see each other very often, you just pick up where you left off. We will be here two nights.

Trueda and I took a leisurely morning in Idaho Falls, ID; mostly I wrote and read. We walked along the Snake River, which runs through the city. Then we set out for Bozeman, MT, our next destination. 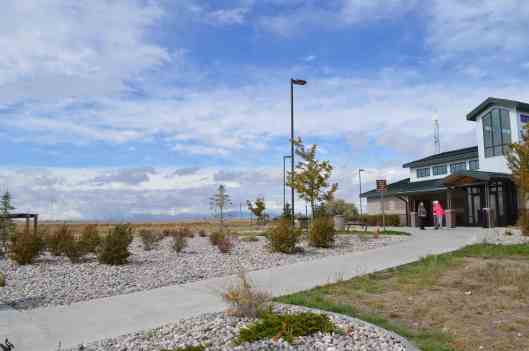 The first half of the drive passed through a whole lot of nothing: flat scrub country as far as the eye could see. A little south of the Montana border a rest area interrupted the otherwise uneventful landscape, and there we met an eighty-two year old man and his lady friend. We chatted with them for a while, and learned that they too were on a road trip, coming from South Dakota and headed toward southern California. People are endlessly interesting. It is unlikely that I will live to see my eighty-second birthday, but if I do, I hope it is with Trueda and I hope we are still living life to the full like this couple.

The second part of the drive took us through the mountains, over the Continental Divide, and down into Montana. A vacation in the Andes Mountains a couple years back taught us that Trueda does not do high altitude well. So I took over the driving while she worked on breathing. Note to self: stay away from mountains.

We are spending the next two nights at the home of two special friends: Brett and Kris Desper. Conversation happened, so it’s their fault that we’re posting this a day late.

I had an FTD moment during the evening. Two conversations were taking place: Brett and I were engaged in one; Kris and Trueda in another. Their two English Springer Spaniels happened to be lounging on the living room floor, and I was suddenly struck by what beautiful animals they were. I said, “What kind of dogs are they?” Kris told me and we went back to our respective conversations.

Here’s the thing: I had interrupted two conversations for a total non sequitur. This is one of the early symptoms of FTD: a tendency to say things that are out of sync with what everyone else is talking about.

It was a small thing, and Trueda later said that she didn’t think Brett and Kris even noticed, but it was a reminder of the reality that the cells in my brain are dying off, taking with them, slowly but surely, my ability to understand and interact with the world around me. I am sad about this.