We must be getting old. We lost an hour today crossing into the Mountain Time Zone and we’re excited because it means we get to go to bed an hour earlier!

Today was a very different day from yesterday. We only drove for about four hours so though we are tired, we aren’t exhausted. At least I’m not; Michael’s pretty close. But the timing of the driving was much better.

The weather was also different. Yesterday was warm and sunny. Today was a bit cooler and cloudy in the morning. We drove into some rain showers our last hour on the road. The rain is greatly needed to reduce the fire hazard so overall it’s a good thing. 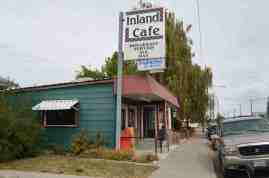 The highlights of the day involved breakfast and sand. We chose to skip the hotel breakfast and instead ate a late breakfast at a small local restaurant. We found the restaurant in part because it was the only block in that area that had cars parked the length of the block. The food was excellent American short order breakfast food and kept us full until dinner time. Besides the good food, we enjoyed watching people greeting one another and joking around with the staff. Obviously, people keep coming back for more food and community spirit. We were told by another patron as we were leaving that the owner has just purchased another nearby building and will be opening up a seafood and steak place. The patron said that whatever “she touches turns to gold”.

The sand came into play an hour south of Boise at the Bruneau Sand Dunes State Park. This group of sand dunes is unique because they are the only known sand dunes in the Western Hemisphere to have formed in the center rather than at the edge of a natural basin (according to Wikipedia). Also the tallest single sand dune in North America is there at 470′ tall. What surprised me were the lovely small lakes at the bottom of some of the dunes. Each lake was rimmed by reeds with some scrub brush just above on the edge of the dune. The sand moves back and forth over the same ground because the winds blow about 30% of the time from the southeast and an equal amount of time from the northwest. We were there just as the wind picked up before the storm. It was amazing to watch as the wind blew across the peaks of the dunes picking up the grey sand and blowing it forward. Of course that meant we got it in our eyes and I must have had my mouth open in awe as I ended up with it in my mouth. It reminded me of how it feels right after you get your teeth polished at the dentist!

Tonight we are in Gooding, Idaho staying at the Historic Gooding Hotel Bed & Breakfast. The B&B is run by a couple of Goodings. We will be talking again about family history tomorrow over breakfast but from what we know Michael and Dean are not directly related. Dean is a member of the Gooding family that settled in this part of Idaho in the 1880’s after immigrating from England in 1867. The city is named after Frank Gooding who was Governor of Idaho and then US Senator in the early 1900’s. Michael’s family of Goodings arrived in Massachusetts in the late 1600’s so any family ties would have to be on the other side of the Atlantic. Still, it’s not often we run into anyone with our shared last name so it’s fun to chat and hear their stories. The hotel building is well over 100 years old and on the National Register of Historic Places.

We’re not sure what we will be doing tomorrow. Some of it depends on the weather.

Midway between Boise and Twin Falls Idaho, we found the Bruneau Sand Dunes. The tallest of them towers nearly 500 feet above the surrounding ground. Unlike most sand dunes, these do not move much. There are two reasons for this. First, they are trapped in a basin, so they have nowhere to go. Second, the prevailing winds shift back and forth between the Southeast and the Northwest, keep the dunes fairly stable. Geologists think they have been here for about 15,000 years. Gray sky and a stiff breeze combined to allow me to make this monochrome image, which I am pleased with.

If I could go back in time 15,000 years, to when the last glacial period was giving way to the current interglacial period, and species homo sapiens was beginning its migration out of Africa, I would be able to capture this same image, or one very similar to it. I think God must love making beautiful things.